Though not well known outside of the poetry world, Stone won accolades and awards, such as the National Book Award for Poetry, the Wallace Stevens Award, the National Book Critics Circle Award, two Guggenheim Fellowships, the Delmore Schwartz Award, and she was a finalist for the 2009 Pulitzer Prize for Poetry, among many others.

Beloved by many, Ruth?s home in Goshen, Vermont became a mecca for students, poets, friends and family members. There she inspired people to make art and write, not only through activities such as the ?poetry game?, but by providing solace and nurture, surrounded by nature and camaraderie. After Ruth died, her grandchildren and Ben Pease began renovating the house and turning it into a writer?s retreat. Their goal is to create an enduring legacy that will keep Ruth?s name alive and nurture a new generation of poets.  It is called: The Ruth Stone House www.ruthstonehouse.org

Nora Jacobson is an award-winning filmmaker of documentaries and narrative films. Her films include The Hanji Box, the 6-part collaborative film Freedom & Unity: The Vermont Movie; My Mother?s Early Lovers, Nothing Like Dreaming, and Delivered Vacant. Her films have screened at many festivals including Sundance, the New York Film Festival and shown on PBS. Click here to find out more about Nora Jacobson?s work.

Doors @ 6pm Join us early for a pizza & beer, Film @ 7:00pm, and Talk given by filmmaker Nora Jacobson to follow. 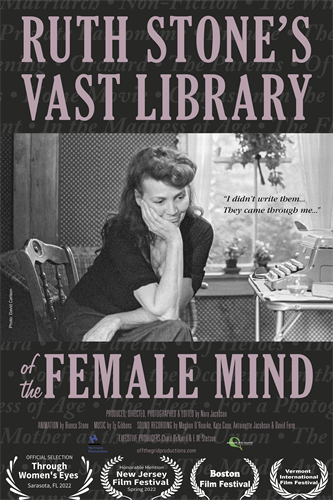 Pay What You Can to support future BAAM programming.

Google Yahoo iCal (Outlook, Apple, or other)
Scroll To Top